Dear Lord, Are You Alive? 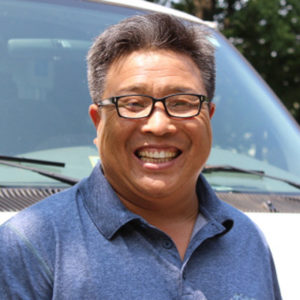 “Dear Lord, are you living God? If so, give me strength so I can rescue the sister student drowned in the water!”

The prayer is the first one Paster Na, who is now worshipping the Lord along with the homeless in Washington D.C. at McPherson Square, gave to the Lord in his life. Born in a family without faith, he began attending a church in an elementary school, and began his spiritual life in a missionary school during his adolescence. In 1978, Pastor Na had a life-changing experience. On the last day of a three-days long mission trip, two students, who were sleeping in a tent, got swept over by a nearby river due to a horrendous flood. The disaster took the life of a female student as another was drowned in the river. At the outcry of the student in the river, Pastor Na prayed sincerely, for the first time in his life,  and threw himself into the river to save the fellow student, in spite of everyone’s concern.

God found in midst of hopelessness

In 1984, invited by his brothers, Pastor Na moved to the United States, with great expectation. However, due to the issues in communication, financial difficulties, and his personal life, he wandered and lived his life in alcohol and cigarettes for two to three years. At the end of the year 1987, he was haunted by suicidal thoughts. At that point in his life, he gave another sincere prayer, after 10 years he did for the student he rescued:

“Dear God, are you alive? If so, please save me. Please allow me live according to Your will, not mine”. On that day, God asked him, “have you ever read the Bible as  my words?” Pastor Na responded no. God responded in his heart that to live according to God’s will, is to live life by obeying His words, and that the pastor’s problems in his life was due to his perfunctory routine of a merely religious life. God’s two responses helped Pastor Na to reflect upon himself.

Upon hearing God’s voice, Pastor Na confessed that his sin with repentance and tears, and that the Lord is his true saving Lord.

The next day, he brought himself into a house of prayer, fasted, read the Bible, and continued to wail and repent. Back then, the grace he received was so great that he held himself fast into His words and prayer. As a result, Pastor Na naturally distanced himself from alcohol and cigarettes, and deeply realized how his past life, drowned in materialistic values, was humiliating.

A Pastor zealous in evangelizing

Pastor Na zealously evangelized, to impart the great Lord. He continued to evangelize with anyone whom he met, regardless of his/her ethnic background. His fellow brothers and sisters, including the pastor of the church he attended, strongly recommended him to be a servant of God by becoming a pastor. “How can someone like me become a pastor?”, he asked. Yet, in midst of his prayer, his desire to learn the word of God more deeply and spread the Gospel better has integrated into his heart. As a result, God led him to Reformed Theological Seminary in Florida and strengthened him through graduating with a Master of Divinity. After graduation, God first sent Pastor Na to Great Multitude Presbyterian church in Maryland to have him serve as an English ministry pastor in 2001. Continuing his ministry, Pastor Na served Messiah Presbyterian church in Annandale VA, and unexpectedly joined the wilderness in 2006, upon resigning from the church.

A friend of the homeless

Throughout his search for ministry, Pastor Na worked at UPS for part-time for living. During the first four years, he couldn’t stop thinking about the poor. What caught his attention was Jesus’ footstep of healing and spreading the Gospel to the marginalized people of the society. So he decided to serve the homeless, prisoners, orphans, sick, and the old. Coincidentally, as he was passing by Franklin Park in DC, watching the park full of the homeless, he made up his mind to preach in midst of them.

In this ministry, Pastor Na has two missions in his heart: that the homeless spread the Gospel and change as volunteers in the society, and that they share the place for local churches so they can undergo spiritual trainings.

Above all, what made Pastor Na happy was that the lives of the homeless have changed after meeting Jesus in their lives. Albert was a 50-years old African American. Previously working as an administrator at an university, Albert had become homeless after a divorce. On the street, he met Pastor Na. After going to the first Wilderness Retreat in 2010 and meeting Jesus, Albert changed. Now, he works full-time at Home Living shelter, educating the homeless. John, once a chef at White House, was going through tremendous pain because of liver cancer resulting from addiction in alcohol. In 2008, he met Pastor Na, found his health, and united with his family again. Now, John is Pastor Na’s one of the strongest supporters and colleagues, helping his ministry. Looking at many homeless friends recovering and regaining healthy lives make Pastor Na’s heart leap.

Family and the way of wilderness

Pastor Na is always thankful towards his wife who supports him in spite of the difficulties in the ministry, as well as his two daughters and son. He couldn’t hold his tears when reading his daughter’s essay for college admission. The older daughter Rebecca wrote that she was, at first, ashamed of his father’s ministry for the homeless, rather than for a local church. So she joined his service out of formalities. However, talking to Albert during Wilderness retreat helped her greatly during the college application process and her college life in general. She further acknowledged that her interaction with Albert helped her realize how precious the homeless are, and that her father’s ministry is valuable. Pastor Na is thankful that the inheritance of faith has been handed down to her children, and has pledged that he will walk down the way of wilderness, together with the homeless.

As long as poverty, injustice & inequality persist, none of us can truly rest. It doesn’t take much to change a life, Get in touch today and start making the difference.

Serving the homeless and poor with the love of the Lord.